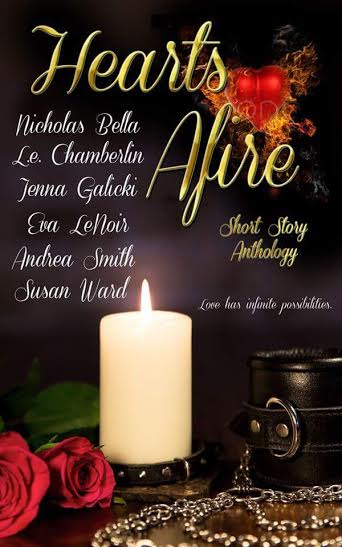 Limited Edition
Plan to curl up with this 6-author, all new story, Valentine's Day anthology. M/M, F/F, Dark Erotica, Menage - want a sneak peek on what's inside?
My Men by Andrea Smith
Here you have the much awaited sequel to "These Men" first released in the BEND Anthology. Can be read as a stand alone, follow the bumpy road of Paige and her men, Cain Maddox and Eli Chambers! The trio is intent on having a baby, but when a non-stork delivery literally lands on their doorstep, someone from Eli's past puts a major wrinkle in those plans. It's a hot summer in DC in more ways than one! Will they be able to work through it? Will their dreams be realized? Let's find out!
Guns Blazing by Eva LeNoir & Andrea Smith
My name is Lloyd Ledbetter and I am the best lawyer New York criminals can
buy. My obsession to detail is their saving grace. I'm focused, determined
and one¬track minded. Nursing my broken heart for the last few months,
I've stayed away from anything that could resemble a relationship.
Until Luke Gunner.
My name is Luke Gunner and I'm the best money launderer criminals can
buy. With an IQ reaching the status of genius, I can practically make money
without breaking a sweat. I'm fun, independent and a lover of life. Settling
down was never a priority especially when I had so many options laid out in
front of me.
Until Lloyd Ledbetter.
Lovelorn: Demon Gate Series by Nicholas Bella
EPISODE 6: “It’s one thing to know that I’m a knight in King Adriel’s court, but it’s another thing to know what that really means.”
I’ve had one successful mission that I managed to complete by the skin of my… well, let’s just say that I wouldn’t have been able to do it without Raphael’s help. He’s become a huge part of my life now and after learning even more about myself and what my role is in our relationship, let’s just say that I think I’m adjusting rather well, considering the circumstances. On top of my personal issues—and I have plenty—the Society has tasked me with another mission. No rest for the wicked, and I do find that I’m enjoying my wickedness even more now that I’m a demon. Nonetheless, I’ve been assigned to a case where a demon is killing and feeding on a bunch of innocent people who seemed to just be a little down on their luck in the love department. Well, that just doesn’t sit well with me and I’m making it my business to bring this demon to my dinner table.
Dirty Red Doll by L.e. Chamberlin
Jemma's a former top-billed adult film actress whose on-screen sex life has always been far more interesting than her real romances. Nearing "retirement age" at thirty-three and still unsure what life after porn holds for her, she's looking forward to finishing one last film and heading off to Europe for an extended, soul-searching holiday.
When Jemma's beautiful new costar shows up on the set, things heat up fast. But when Heidi makes it clear she's not available offscreen without a commitment, Jemma is forced to decide what's more important: the first taste of freedom she's had in 15 years or a chance at love.
The Manny by Susan Ward
My name is Graham. I’d spent most of my life in the military in the Special Forces until that career-ending bullet in I took in Kandahar. Now I serve as personal security for the most famous rock star on the planet. My life worked for me. I didn’t need more and I sure as hell didn’t need to have the heterosexual fantasy.
I was living life full-throttle in every man’s dream—in the center of a sexual orgy that spanned the globe, without limits or judgment. Why would any man want to change that? Not me.
Until I saw him. And then it all changed. I knew he was the one for me. The one the term all was invented for.
Hollywood Highlights by Jenna Galicki

Tyler Kennedy, renowned New York City stylist, has already made a name for himself among the Hollywood elite. An opportunity to work on the West Coast gives him a reason to leave everything behind, including the guy who broke his heart. He moves to Los Angeles where he’s determined to start his life anew.

Lorenzo Di Carlo is America’s number one heartthrob. He’s pitted against Hollywood’s most beautiful leading ladies, but often seen socializing with an array of handsome men. Speculation about his sexuality keeps his name at the top of every headline, so his manager and press agent won’t let him confirm or deny the rumors. When his new stylist walks in and knocks him off his feet, he has to decide what’s more important – his career or his heart.