After a shoulder injury ends her respectable career as a police officer, Mak also known as Maddison Abigail Kinloch turns to the seedy world of private investigations by default. Now her job consists of cheating douchebags and baby daddies dodging child support. Things can’t get much worse.
Moon controls Arizona’s largest crime syndicate. His bronze skin and blue eyes leave a girl breathless even when that girl knows he’s bad news. Moon doesn’t give a flying fig what Mac thinks; he wants her—ex-cop, bad attitude, and all.
How does she resist the dark side when her body craves Moon’s searing touch? Things only get hotter in Phoenix when Mak finds herself in a deadly situation and must turn to Moon for help.
He’ll help but there’s a price. Heat turns to sizzle and hearts combust when Mak and Moon find themselves wanting more than a few hot nights beneath cool sheets. 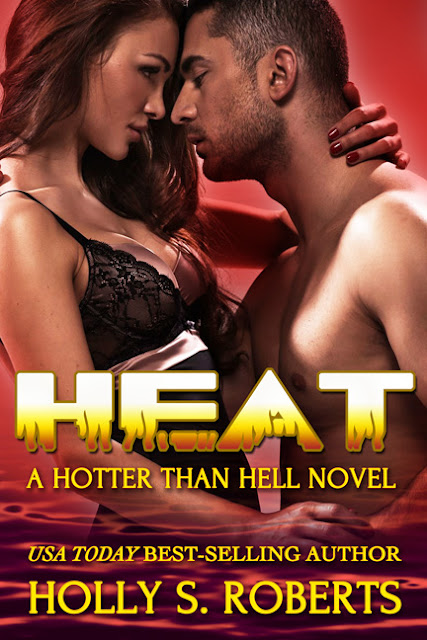 Nice Excerpt (unedited)
My throbbing head wakes me. The last thing I want is to open my eyes. Maybe someone set off explosives in my brain. I can hear the soft whir of a ceiling fan while the cool air cascades over me. My head actually thumps to the whir. While I’m contemplating opening my eyes, I use my other senses to give me a clue about what’s happened.
I’m not in my own bed. Mine has a lumpy mattress. The bed I’m lying on is firm and comfortable. The ceiling fan in my bedroom twirls with a loud, steady hum. This one is finely balanced and it’s only the generated wind that makes noise.
Like a remembered nightmare, I suddenly recall Dandridge’s hairy dick, a silver bat, and several men with guns. My eyes pop open. The room, thankfully, has muted light though I still squint as I look around. I give a small scream when I see a man sitting in a large chair in the shadowed corner of the room. He’s watching me. My head objects to the scream so I slam my jaw shut, roll to my side and cover my face with my forearm. A soft moan caused by the pain escapes my throat. The man doesn’t make a sound. It’s a minute or two before I can peel my eyes open again.
He’s still there.
His arms are stretch along the armrests of the chair and his fingers wrapped over the ends of the armrest. He’s tall. I know this because there is no chair-back behind the top of his shoulders and head. His legs are long and clad in suit pants similar to the ones the thugs wore. They must keep Thugs-R-Us in business.
“Miss Kinlock.” His smooth whiskey voice fills the room.
“Who…” I croak and try again, “Who are you and where am I?” A sudden ache travels behind my head and I wince and shut my eyes again.
“Lift up.” His voice startles me because it’s directly in my ear. I never heard him move. His hand slides beneath the pillow beneath my head and he helps me sit up slightly. The cool rim of a glass meets my lips. “I have something here for pain but take a drink of water first.”
He smells good—in a musky, delicious cologne and man kind of way. It’s such a stupid thing to think about when my last memories are of Dandridge’s dick and thugs with guns. I take a sip of water and then have two pills slipped between my lips. There’s this strange jolt of pleasure at his touch. It throws me off balance, more than a blow to the head has, and like an idiot, I swallow. I have no idea what kind of pills I’ve just taken. My brain is quite slow on the uptake and I decide if I swallowed illegal drugs, I’ll live with the consequences as long as they take away my damn headache.
I inhale slowly and open my eyes just in time to see the man lean his hip into the mattress and sit beside me. The sheet covering me stops just below my breasts and his movement pulls it down a bit further. He doesn’t so much as sneak a peek at my breasts. I’m impressed.
“You are?” I ask in a low voice that doesn’t distress my brain too much.
He has such an intense look of concentration on his face. I feel like a puzzle he’s attempting to put together. He moves a section of my hair off my cheek. His eyes follow the movement of his hand and I think he’s actually surprised at what he’s done. “Call me Moon.”
Damn. It doesn’t take a genius to figure out that I’m in a bad situation. I can’t believe I didn’t recognize him. It’s the shadows of the room and the damage to my brain cells. Or, at least that’s the story I’m feeding myself. I’ve seen countless pictures of him. He’s usually escorting some woman to a ritzy fundraising event though he somehow manages to turn his face from the cameras. If not a public appearance, the pictures are taken with a telephoto lens trying to catch him in illegal activity. 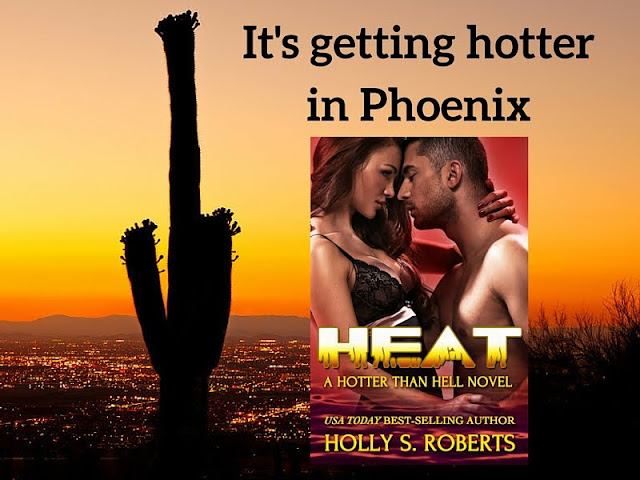 Naughty Excerpt (unedited)
My teasing earns a reward. In one fluid move, he stops and pulls me into his chest. We’re in the shadows and even though I know he has guards, I feel that we’re the only two people inside his walled paradise. His lips are gentle. His hands go to my ribcage beside my breasts while he licks and tastes my lips. His thumbs glide across the material of my shirt in a soft caress over my breasts, though not quite touching my nipples. The kiss remains playful and I want sensual. I try to angle my head and but he moves with me and keeps things light and flirty. I moan into his mouth and receive a small answering groan.
“Why are you doing this?” I ask throatily after he releases my lips and places light kisses along my jaw.
“Because you always taste so damn good,” he breathes. His teeth scrape where his lips left a burning trail of fire. “Here too.” He bites down on the tendon of my neck and my body heads into the danger zone. The zone that says, fuck me and please make it good.
I lift my hands to his jaw running my fingers over the sexy scruff. It sidetracks me from what he’s doing until he slides his hands between us and cups my breasts. Now, his thumb rubs across my nipples. My entire body is at attention. He moves one leg between mine and pulls me closer so my crotch is riding his thigh.
Fucking hell.
The friction of our clothes and the pressure of his leg drive me wild. My clit swells as I rub myself against him. Moon’s right hand slides down and he gains access beneath my shirt. I react with a shudder when he touches the bare skin on my side. His fingers are so damn hot, they burn. His other hand goes to my ass and he pulls me tighter against his leg. I need to be naked and not standing outside with clothes separating us. I need to fuck him instead of humping his leg. I need so many things at once—more pressure, nipple action, him—inside me.
It’s only been about two minutes since he started this and my blood is roaring through my body while Moon’s heat consumes me. His lips return to mine with more light nibbles. He’s controlling my body and keeping me from ending this slow torture. Then, like he’s reading my mind again, his fingers slip beneath my bra and tease over my nipples. His mouth leaves mine and he rakes his teeth down the sensitive skin of my throat. His large hand cups my other breast and his fingers squeeze until I’m on my toes and panting in his ear. I’m holding onto his waist for dear life. The pulsing ache spreads from the juncture of my thighs to my nipples and back again. The two points are a circuit of energy. Then, he’s back at my mouth and he’s done playing around. I place my hand at the front of his pants and press against his erection. He moans while his tongue delves deep. He squeezes my nipple with slow steady pressure. It hurts. It’s delicious. It’s exactly what I need. He moves his hand down so he can cup my ass again. He grinds me against his leg. The sensations are overwhelming. I can’t breathe. I can’t think. But fuck do I feel. I’m caught off guard when an orgasm jolts through me. I’ve never felt this way before. I get off on control even when it comes to my orgasms. Moon takes me over the top with nothing but the pressure of his leg and his damned fingers that have switched to my other nipple so both are sore and needy.
My blood is pumping through my veins with the pulses of my orgasm. I fall against his chest and his arms surround me as I ride out the waves. When the last ripple fades, he kisses me again before allowing me to bury my face in his neck. Why the hell did he give me that? I’m too undone to think of a possible answer. 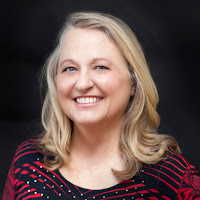 Holly S. Roberts is the USA Today best-selling author of the Completion Series and Club El Diablo Series. She lives high in the Arizona Mountains with her husband and two spoiled dogs. 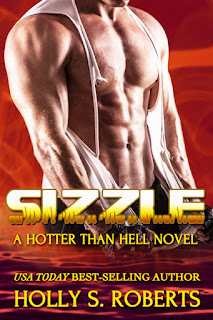 The Arizona Desert sizzles and it's hotter than hell.
Alex Gomez is the enforcer for the largest crime syndicate in Arizona and makes no excuses. His hands are covered in blood and the lines between right and wrong blurred.
Celina Thomas has a deadly secret. Only money can fix her problem and she needs a lot of it, quickly. She’s gifted with a body and face that men are willing to pay for. She makes the decision to enter the world of high class escorts but her heart cries at the injustice.
One night with Alex and Celina’s plan turns upside down.
One night with Celina and Alex’s heart of ice begins to melt.
Celina’s secret could kill them both. Can she trust Alex and place her life in his hands? Can Alex let her escape regardless of the consequences?
Passion ignites as Alex and Celina sizzle with burning need while death lurks on the sweltering Phoenix horizon. 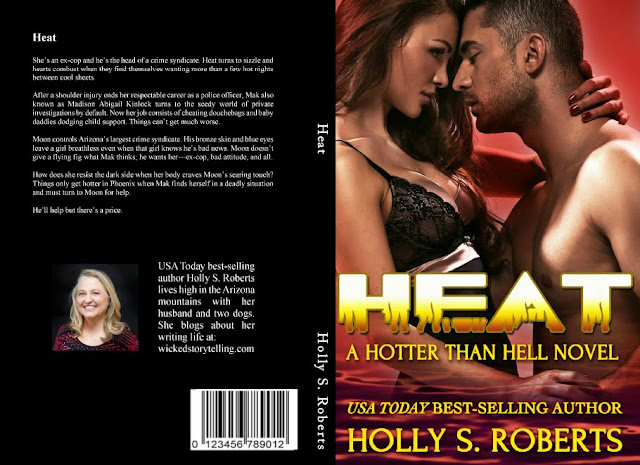